This is why people need to learn to go to the legal brothels near Las Vegas!

First of all! … who the hell is taking this disgusting hag to their room in the Wynn? 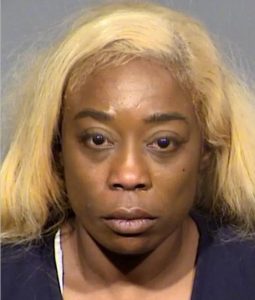 A man reported to police that he invited two women he met in a bar to his hotel room, according to an arrest report. He later woke up in his room with a bloody nose and discovered that his property was gone.

The victim reportedly made drinks for the women in his room. After the drinks he gave one woman $200 to leave because she was rude. The last thing he remembers, the report said, is walking the woman to the door of the room.

“He believes he may have been drugged,” police said. Ya’ think!

Police collected a urine sample from the man for testing. Las Vegas Metro said video surveillance confirmed the man’s account of going to the room with the two women. Hotel video showed authorities that one woman left about five minutes before the second suspect. Police identified the second woman on the video as Danette Colbert.

What to Do If You Suspect You’ve Been Drugged or Robbed by a Stripper, Escort, or “Girl You Met at the Bar”

2 Responses to “You Gotta Be Frickin’ Kidding Me! Woman Charged Again for Drugging and Robbing a “John” at the Wynn”